Review Tour: A Paraphrase of Paradise Lost for Youngsters by Joseph Stemberga and Thomas Lane

Goddess Fish Promotions is organizing a Virtual REVIEW ONLY Tour for A Paraphrase of Paradise Lost for Youngsters: The Tragedy of Lucifer by Joseph Stemberga and Thomas Lane, a 36 page Children's available now from Tellwell Talent. The tour will run every Tuesday for 4 weeks starting on July 26, and the book is available in PDF, mobi and ePub formats. 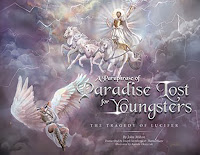 This retelling of books V and VI of the epic poem Paradise Lost, written by John Milton, follows the story of Satan's rebellion and fall from grace. The Father announces his heir, Satan rebels, Abdiel tries to reason with the fallen angels, followed by a war scarring Heaven's landscape. Brother against brother, the rebellious few against their Father, a family torn apart by war, concluded by the victor, the Father's chosen Son, casting the disobedient out of paradise.